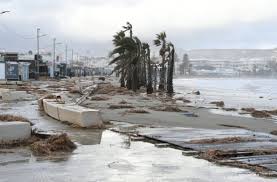 Four people have died and many injured after a powerful storm swept over Spain with strong winds, heavy snowfall and freezing temperatures.  The country’s Mediterranean coast and the Balearic Islands bore the brunt of Storm Gloria, with more than 30 provinces placed on alert by the Spanish meteorological agency. The record cold waves of 8.44m crashed onto the shore in Valencia on Monday, according to port authorities, while witnesses said waves grew throughout the day at Barcelona’s famous Barceloneta beach.

A 63-year-old man died after he was hit by roof tiles lifted by a gust of wind at his home in Pedro Bernardo, in the central province of Avila, the town’s mayor said.

Unusually cold weather was also blamed for the death of a 54-year-old homeless woman in Gandia, near Valencia, according to a local official.

Spanish media quoted the mayor of the Valencian town of Moixent as saying a man had died after being found outside his home showing signs of hypothermia on Monday morning.​ In northwest Asturias region, another man was struck and killed by a vehicle on a snowy road while fitting chains to his car, an emergency services spokesman said.

The regional government of Catalonia ordered a ban on all outdoor activities in the Girona, Barcelona and central Catalonia regions, a spokesman for its interior department said. Those who did not comply with the order could face a fine.

The storm also forced the closure of Alicante airport, leading to the cancellation of nearly 200 flights.

The National weather agency Aemet reported winds of up to 71mph (115kph) hour in the province of Valencia, where at least 120 councils ordered schools to close. The forecasters said the storm would ease by Wednesday.