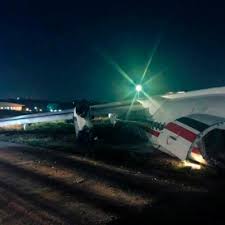 A small aircraft involved in a runway upgrade at Dubai International Airport crashed Thursday night, killing four people and halting traffic at the world’s busiest airport for international travel for almost an hour.

Authorities could not explain what caused the crash of the Diamond DA62 plane with a tail number belonging to Flight Calibrations Service Ltd. of Shoreham, England.

The UAE’s General Civil Aviation Authority said the three British citizens and one South African on the plane were killed.

Early Friday morning, police, paramedics and flight investigators worked at the crash site, some eight kilometres (five miles) southeast of the airport in Mushrif Park near the city-state’s water reservoirs. Police told journalists they could not visit the crash site, which was hidden from view by sand dunes.

The airport, home to long-haul carrier Emirates, is the world’s busiest for international travel. It halted flights from 7:36 p.m. until 8:22 p.m. over the crash.

Flight Calibrations Service announced in November it signed a contract to work on the airport’s “navaids”, the beacons around an airport that show pilots where runways are and how to land on them. Dubai International Airport later said the plane “was being used to calibrate the approach systems” at the airport.

An employee at Flight Calibrations Services, which has two Diamond DA62s stationed in the United Arab Emirates, declined to comment on the crash Thursday night.