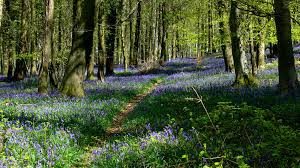 The Bronze Age ring cairn  made up of ten small standing stones on top of a raised bank in a woodland enclosure near Tidenham in Gloucestershire discovered. It is believed to be the only site of its type in the area, according to Jon Hoyle, an archaeologist working for the county council. Now the local and  international tourists are coming here to see this 4000-years old ritual structural monument. The Forest of Dean is home to the great range of natural and architectural wonders. All of them well worth a visit. Here the tourists can see forest’s 4000 years history, or enjoy a stroll around a nature reserve.

He first spotted the ring when examining the results of a survey of the forest using an airborne laser scan in 2006. The technique uses a computer algorithm to strip away the trees and vegetation covering the forest floor to create a 3D impression of the surface.

It revealed a 25-metre-wide raised circle around a seven-metre-wide central mound, which Mr Hoyle initially thought may have been a gun emplacement from World War II.

However, when he went to see the area for himself in 2010, he realised it could date back to around 2,000 B.C. Of particular interest were the one-metre-high standing stones protruding from the ring, consistent with early or middle Bronze Age ring cairns found in Wales.

Mr Hoyle said that nobody knows precisely what they were used for. Some have been found in association with burials, and often there appear to be residues of charcoal in places like this, suggesting rituals that involved fire.

The same survey also uncovered more than 100 possible burial mounds which have not yet been properly investigated.

Another Bronze Age monument, a round cairn burial mound made up of limestone slabs, was found in nearby Tidenham Chase in the 1960s.