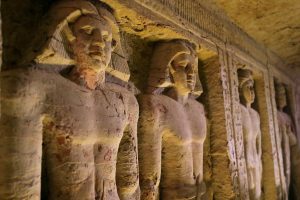 The ‘one of a kind’ well-preserved, 4,400-year-old tomb of a royal priest and his family was discovered in Saqqara, an ancient city south of Cairo.

According to Khaled al-Anani, Egypt’s minister of antiquities discovery dates back to the rule of Neferirkare Kakai, the third king of the fifth dynasty of ancient Egypt. As per Metropolitan Museum of Art, The fifth dynasty governed for less than two centuries, from 2,500 B.C. to about 2,350 B.C.

Mostafa Waziri, the secretary general of Egypt’s supreme council of antiquities said that the tomb had remained untouched.

The tomb that has been under excavation since November is nearly nine feet tall and 32 feet wide. The walls are decorated with colourful hieroglyphs and statues of pharaohs, while sculptures of the buried priest and his family were placed in the tomb.

In Saqqara, thousands of years ago, was the cemetery for Memphis, the capital of the Old Kingdom — a necropolis. There have been other discoveries made in Egypt in 2018 – a 2,000-year-old, perfectly sealed sarcophagus (July); the tomb of a prominent priestess (February); and the grave of a royal goldsmith (September).

The remnants of an astonishing ancient civilization, pyramids have become significant tourist attraction.