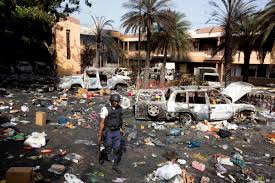 Haiti, even as survivors of the previous day’s temblor were sifting through the rubble of their cinder block homes. The death toll stood at 12.  The U.S. Geological Survey said the epicentre of the aftershock was located 15.8 kilometres north-northwest of Port-de-Paix, the city hard hit by Saturday night’s 5.9 magnitude earthquake. Sunday’s aftershock had a depth of 10 kilometres.

The earthquake caused panic on streets where emergency teams were providing relief to victims of Saturday’s quake, which toppled cinder block homes and rickety buildings in several cities.

Among the dead from Saturday night’s quake were a 5-year-old boy crushed by his collapsing house and a man killed in a falling auditorium. The authorities said 188 people were injured.

There are more than 500 students would not be able to return to school on Monday.