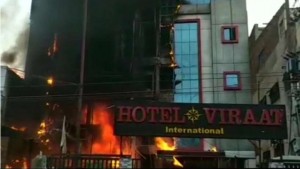 At least five persons were burnt to death, including a minor girl when a massive fire broke out due to short-circuit in air conditioner at SSJ Hotel and spread to another hotel, Viraat Hotel, in Charbagh in the busy hours of Tuesday.

The identity of the deceased could not be ascertained. More than a dozen people have been injured and are admitted in hospital. A huge ball of smoke billowing out spread panic and commotion in the locality.

He said the fire first broke out in the first floor of SSJ due to short circuit in air conditioner and later spread.

He said over 55 persons were inside both the hotels when the fire broke out around 5am. The panic hit residents so hard that they came out from their homes on the roads.

While some of other residents used their presence of mind and brought out buckets filled with water to douse the flames, others rushed to the terrace and made frantic calls to the fire brigade.