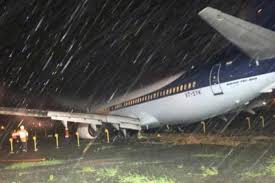 Rains, along with wind speed and low visibility led to flight delays throughout the day. Runway visual range (RVR) equipment was in use so that flight operations are not halted due to poor visibility.

Additionally, Mumbai airport’s main runway remained closed on Tuesday after a SpiceJet plane overshot its mark while landing amid heavy rain late on Monday night as per the officials. This has led to disruption to the movement of flights. As per Mumbai International Airport Pvt Ltd 54 flights have been diverted to other cities from the Chhatrapati Shivaji Maharaj International Airport. The disabled aircraft recovery kit (DARK) is awaited, to remove the stuck aircraft, which is only available with Air India and is yet to reach Mumbai from Mangalore.

Flights have also been delayed and according to Flightradar24, a Swedish internet-based service that monitor real-time flight movements on map, 85 flights to and from Mumbai have been cancelled due to the poor air traffic situation.  As per Flightradar24, departure flights are delayed by an average of 132 minutes, leading to the cancellation of 51 departing flights. It added that there was a delay of 102 minutes in arrival and 34 flights to Mumbai were cancelled after midnight.