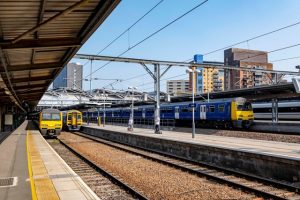 Network Rail, Northern and London North Eastern Railway (LNER) have announced that additional rail services will run when the UCI Road World Championships head to the county later this month.

Between Sunday, 22 September and Sunday, 29 September over 1,400 cyclists from 90 countries will compete in the 2019 Road World Championships. The routes of the races include between Harrogate and Leeds and Harrogate and Bradford. Spectator numbers are expected to be high, so Network Rail, Northern and LNER have worked together to put on 62 additional trains between York and Leeds via the Harrogate line, providing 17,000 extra seats for fans.

The additional services will be in operation on 21/22 and 28/29 September and will provide more seats for fans and offer increased travel options for those wanting to see the Championships. On Sunday, 22 and Sunday, 29, the first trains from York to Harrogate will be over an hour earlier than the usual service, making viewing the Championships easier.

Network Rail has also been working to install a new transparent roof over the main concourse at Leeds station to brighten up the area. Work on the project progresses well and will be completed ahead of the Championships visiting Leeds.

Matt Rice, Route Director North and East for Network Rail, said: “This is a fantastic event for Yorkshire and we know that spectators will be out in force.

“We want to make sure that fans can travel between Harrogate and Leeds easily which is why we have worked with both Northern and LNER to put on additional services. Not only will this make travelling easier for fans, but also make sure as many people as possible have the opportunity to get involved.

“The additional services showcase the best of the rail industry and all parties working together to put passengers first.”

Steve Hopkinson, Regional Director at Northern, said: “It’s great for Yorkshire to be able to host the World Championships and we want to make sure everyone has an enjoyable week of watching world-class cycling.

“We are putting on as many trains and carriages as possible, but we expect all our services in and around Harrogate to be really busy. So, we’re asking all customers to plan carefully and give plenty of time to travel to and from any of the stages.”

Suzanne Donnelly, Commercial Director at LNER said: “Harrogate is a really important destination for LNER so we wanted to support the town and help visitors during the UCI Championships by providing extra services. We’re pleased to provide thousands of extra seats by using some of our brand new Azuma trains, allowing visitors to get a taste of what’s to come before they’re permanently introduced on the route later in the year.”

Andy Hindley, CEO for Yorkshire 2019, said: “We’re hugely grateful to Network Rail, Northern and LNER for organising these extra trains as it will mean thousands of people – both fans and local residents alike – will be able to travel to and from Harrogate during the Championships and benefit from this improved service.”

Northern are asking customers to leave their bikes at home. The trains will be busy and having to take bikes will mean fewer people will be able to travel.