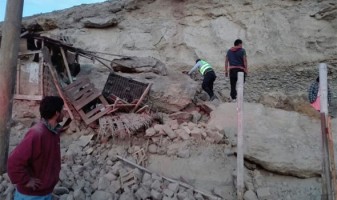 The coast of southern Peru has been stuck with a powerful earthquake of 7.1 magnitude leaving one person dead and several dozen injured.

Given the intensity of the quake, it was feared that more people might have died but the authorities rolled back its statements which said a second person had died and 17 were missing in the mine.

Homes and roads collapsed and several municipalities were left without electricity. Following the aftershock, the residents of Lomas had to evacuate the coastal town. Jorge Chavez, chief of Peru’s Civil Defense Institute, told local radio station RPP that 65 people were injured but withdrew his earlier statement that a second person had died in the town of Bella Union.

The damaged roads in the quake caused delays to reach the affected zones for help as they were mostly rural and remote areas. Mr. Chavez added saying that the aid workers and supplies would be sent to the nearby cities.

The epicentre of the quake was in the Pacific Ocean 25 miles (40km) from the town of Acari.

The President of the country, Pedro Pablo Kuczynski tweeted saying that the needed humanitarian aid will be sent to the affected areas. The US Pacific Tsunami Warning Centre initially warned “hazardous tsunami waves are forecast for some coasts” and larger-than-normal waves could hit Peru and Chile. However, later the tsunami threat was withdrawn.

Chile’s National Emergency offices said there were no reports of injuries, damage to infrastructure, or interruption of basic services.