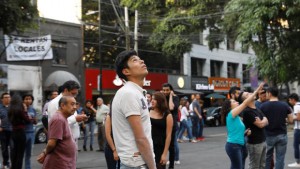 Mexico hit by 7.2 magnitude earthquake causing minor damages to the buildings in the southern state of Oaxaca, with an epicenter close to a surfing resort on Oaxaca’s Pacific coast.

There are no reports of deaths till now. The interior minister Alfonso Navarrete said to the press officials, that this minor earthquake peeled the city structure causing the traffic disturbances.

The epicenter has the depth of 24.6 km (15.3 miles), according to the US Geological Survey. Both the south of Mexico and the capital are still reeling from earthquakes that caused widespread damage in September 2017, killing more than 300 civilians.

The interior minister, Alfonso Navarrete, said that the earthquake caused some that the superficial damage to buildings in Oaxaca, but no deaths had been reported.

The state’s governor said about 100,000 people had lost power and electricity. The tremors were felt as far away as Guatemala to the south.

In Mexico City, buildings swayed for more than a minute as seismic alarms sounded, with older structures in the chic Condesa neighborhood knocking into each other, and some cracks appearing in plaster and paintwork.