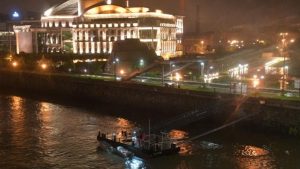 A tourist boat Mermaid capsized on the Danube River in Budapest, leaving at least seven tourists dead and 19 missing according to the South Korean Ministry of Foreign Affairs. The boat with 33 South Koreans on board collided with another vessel in the Hungarian capital Wednesday night.

The Korea’s Ministry of Foreign Affairs said on Thursday that many of the passengers on board were not wearing life jackets.

Earlier on Thursday, South Korea’s Foreign Ministry said seven South Korean tourists had died, but it later clarified that the people who had died might not all be South Korean citizens.

The 34 people on board included 30 tourists, two guides, a photographer and a local, non-Korean boat captain, Very Good Tour’s chief operating officer Lee Sang-moo said at a press conference in Seoul on Thursday. The tour group was on the fourth day of a nine-day tour around Croatia, Slovakia, Czech Republic, Hungary, Austria and Germany.

The tourist boat, called the Mermaid, had been operating on the Danube since 2003 and there had been “no signs of a possible issue with the boat” as per the boat company.

South Korea’s Foreign Minister Kang Kyung-wha will head up a central disaster and safety countermeasures headquarters, which will aim to ensure smooth dialogue with the victims, families and the tour boat collision.