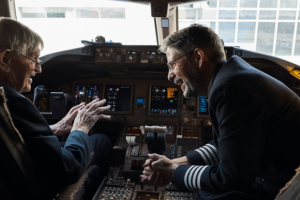 Former RAF pilot Frank Dell, 96, can today be found making his way through the hallways of his Bupa care home in Sydney. In his younger years, he was flying high over Germany in World War II, even carrying Royals, before joining British Airways as a commercial pilot.

Now, 45 years after his retirement, the airline has worked closely with Bupa to make one of his wishes come true, as Frank ventured back into the flight deck of an aircraft.

The visit forms part of British Airways’ commitment to 100 acts of kindness across the world as part of its #BAMagic100 campaign, to celebrate its centenary this year.

Born in Hove in 1923, Frank grew up on the Sussex coast and joined the Royal Air Force in 1941, quickly rising to the role of Flight Lieutenant. His six years in the Royal Air Force were spent behind the controls of a De Havilland Mosquito flying over Germany during World War II.

It was a risky role, as Franks recalls: “In 1944, I lost a good friend of mine who also happened to be my navigator when our plane was shot down in Münster along the western edge of Germany near the Krupp armament factory.

“It all happened so quickly. One minute I was in the plane at 28 thousand feet and the next moment I was in the fresh air,” he said.

Frank was confronted by some horrific scenes as he trekked through European countryside.

“I was actually walking for four nights and didn’t link up with anyone until the fifth day. As you can imagine, I was incredibly worn out and tired.”

Thankfully Frank survived the war and after leaving the RAF moved to Marlow in Buckinghamshire, where he raised two sons with his wife, Isabel. Keen to stay in the cockpit, Frank was quick to explore roles with other airlines after the war.

“Being a pilot was beyond the reach of average people like me in terms of the cost. Then the war came along and paved the way for me to learn to fly,” Mr Dell said.

“When my time came to be released, there was no job for me in the air force, so I started with British European Airways. It was amazing to see how much pre-war flying and training came into the category of what we were doing then.

“It was a great privilege to work for British European Airways and now, an incredibly proud moment to help them celebrate their 100th birthday and be back in the cockpit again.”

Frank flew with British Airways for thirty years between 1946 and 1976, clocking up millions of miles and even carrying some well-known faces including royalty.

“I had no idea that 1976 was going to be my final year with British Airways, so I hit the jackpot by being able to fly a well-known Royal in my very last year of service. There’s something of an unspoken pilots’ agreement that you don’t talk about the people you’ve flown – especially at that level – but it’s a memory that I’ll treasure forever.”

After retiring, Frank and Isabel remained in Marlow, though their son moved out to Australia. The couple followed in 2000 to be closer to their grandchildren and, after Isabel passed away, Frank moved into Bupa’s St. Ives care home in Sydney in 2018.

Reba Hatcher manages Bupa St. Ives care home in Sydney and says flying had been a major part of Frank’s life and has created many interesting conversations within the home.

“Frank is such an inspiring role model to me, the staff, residents and visitors. It’s so important for us as carers to celebrate the lives and achievements of our residents and to shine the spotlight on what makes them so unique,” Ms Hatcher said.

Reba got in touch with British Airways, who quickly picked up the idea as part of their #BAMagic campaign. With the two companies working together to arrange the visit, Frank soon donned his suit and tie before meeting pilots aboard a Boeing 777 at Sydney airport.

Reflecting on the day he said: “It’s been over 30 years since I was last in the cockpit, and I never thought I’d be here again.  While the technology has changed, there are so many things that have stayed the same, and it’s brought back some wonderful memories.”

As British Airways lines up on the runway to celebrate its centenary, the airline’s Director of Brand and Customer Experience, Carolina Martinoli, shared Ms Hatcher’s sentiment.

“As soon as we heard that former British Airways pilot, Frank wished to take a trip down memory lane, we wanted to do all we could to make his dream come true by visiting a flight deck once again.  We’re absolutely honoured to have people like Frank and all our customers and colleagues join us in celebrating our milestone 100th birthday this year.”

To celebrate its centenary, British Airways has painted a number of aircraft in its heritage liveries, including an A319 in the colours of British European Airways (BEA), which is the airline’s short -haul predecessor that Frank used to fly for.