AEGEAN Supports The Extension Of The Tourism Season 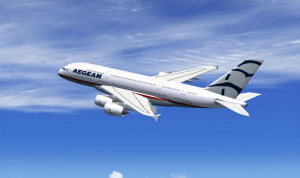 Passenger traffic in the domestic network remained at last year’s levels, despite the operation of five other carriers active in the domestic market (three Greek and two foreign carriers), given AEGEAN’s fare promotional activities as well as supporting connecting traffic.

AEGEAN’s international traffic from Athens grew by 15%, with the group maintaining for the first time during the winter season, routes and frequencies mainly in France, Italy and Germany (i.e. Nice, Marseilles, Bologna, Basil, Venice, Catania), thus contributing on the extension of the tourist season.

It is highlighted that international traffic out of the regional bases grew by 30% in November 2018, with Aegean operating for the second consecutive year direct flights during the winter season from Heraklion, Crete to 11 destinations in Germany, France, Austria, Sweden and Norway, in co-operation with German tour operators, which will continue until April 2019.

“Extending the tourist season in our country is crucial and requires investments in hotel accommodation, infrastructure and services, which could support also local employment. AEGEAN contributes to this effort by investing in its network expansion during the winter season at a cost. However, to ensure the effective results, coordinated efforts by the state and all interested parties in the sector are required”.