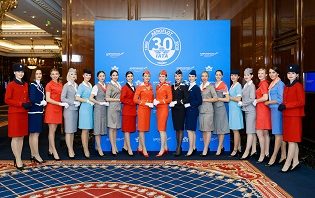 Aeroflot celebrates 30 years since becoming a member of the International Air Transport Association (IATA).  Alexandre de Juniac, Director General and CEO of IATA, has arrived in Moscow to personally congratulate the airline on the milestone.  He emphasized that the largest Russian airline has been a valuable member of IATA for three decades and continues to play an important role in the Association.

Alexandre de Juniac said: “I can see why Aeroflot has been winning awards for its service. The airline has a clear business strategy, with a strong customer service ethos, well trained and motivated staff. Aeroflot is focused on the digitalization of the business process. It is the fourth ranked airline globally for this aspect of operation. The company is geared around digital transformation. This experience is highly valuable for IATA. Digitalization is one of the industry’s priority goals.  We look to Aeroflot to be a partner in IATA projects, and be at the forefront of the changes that the industry is making to embrace the technology revolution”.

Vitaly Saveliev, Aeroflot CEO and member of the IATA Board of Governors said: “Aeroflot’s joining the International Air Transport Association has driven a large scale consolidation of the Russian and global airline industry. IATA’s mission is to represent, lead, and serve the airline industry. Aeroflot fulfils the same mission in this country. Over the years Russia became an integral part of the global aviation, an absolute leader in the dynamic region of Eastern Europe. Aeroflot is actively involved in promotion of IATA’s innovative solutions in the Russian market. For instance, together with IATA we are introducing the modern NDC (New Distribution Capability) standard. Aeroflot gained level 3 NDC certification from IATA”.

Aeroflot joined IATA in October 1989 at IATA’s 45th Annual General Meeting in Warsaw. Aeroflot became the first Russian carrier to be awarded membership of the Association and paved the way for the other players of the Russian air transport market. Today, 10 airlines represent Russia in IATA. In 1989, the Soviet airline held leading positions globally by passenger numbers. In 1990, it entered the Guinness Book of Records as the largest airline in the world – that year the number of passengers carried reached 139 million. After the collapse of the USSR, passenger traffic fell to its lowest point of 3 million passengers carried by the airline in 1994. The turning point was 2009: the effective anti-crisis measures helped take the company out of the crisis and create a powerful aviation holding on its basis. In 2017, Aeroflot returned to the global aviation elite after 30-year span. Aeroflot, together with its subsidiaries, transported 50.1 million passengers and entered the top 20 largest airline groups in the world in terms of passenger traffic. By its centenary in 2023 Aeroflot Group is set to carry 90-100 million passengers and win back its leading positions.

For 30 years, Aeroflot has been acting as the main promoter of the IATA’s global initiatives in Russia launching IATA projects across different areas of operations. By and large, due to Aeroflot’s efforts e-ticket was introduced in Russia, IATA BSP (Billing and Settlement Plan) and CASS (Cargo Account Settlement System) were launched to boost agent sales efficiency. Aeroflot became Russia’s first air carrier to enter the IATA Operational Safety Audit (IOSA) register. Aeroflot was the first in this country to successfully pass ISAGO (IATA Safety Audit for Ground Operations). Since then, the airline has regularly confirmed its compliance with both sets of standards through recertification audits. Aeroflot implements IATA’s recommendations on the prevention and management of disruptive behavior on board and is the leader in countering unruly behavior on airplanes in Russia.