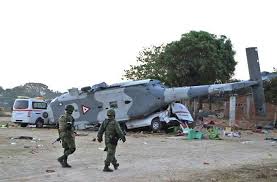 At least 25 people were killed when an Afghan army helicopter crashed in western Afghanistan on Wednesday, NAM News Network reported citing officials. Both pilots and 23 passengers were killed.

Both pilots and 23 passengers were killed. Among the dead were the deputy army corps commander for western Afghanistan and head of the Farah provincial council.

Senior government and military officials often travel by helicopter in regions where the Taliban has a large presence, NAM News Network reported.