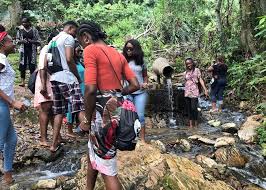 It is a known fact that Africa’s tourism witnesses more money from local tourists. According to the World Travel & Tourism Council (WTTC), domestic tourism contributes 56 percent of Africa’s revenue from tourism. The other 44 percent comes from foreign tourists.

Abdesslam Benzitouni, the head of communication & public relations at Jumia said, ‘‘Domestic tourism is already a reality. People are traveling more and more across their country and in the continent as well. For instance in Kenya, where I live, the domestic tourism has been a key growth driver in the industry in the recent years. I think last year, the domestic tourism increased by like 30 to 40 percent. This is very interesting to know.

You know, the volume spent by the local traveler in Africa is higher than the international tourist even if the local traveler spends per person is often lower. All the economy around tourism and travel represent 8.1 percent today of the African GDP, which is great.”

It is an interesting fact that in spite of the lack of initiatives towards boosting local media tourism, locals are contributing more.

With over 1.1 billion Africans expected to be middle class by 2050, African governments need to invest in infrastructure, reduce local flight tax and come up with initiatives for promoting new locations for local tourism.