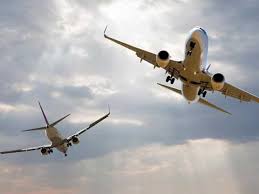 The Aircraft Accident Investigation Bureau (AAIB) started a probe on an incident that took place on December 23, when three aircrafts came extremely close to each other in the Delhi Flight Information Region. These flights were Dutch carrier KLM, Taiwan’s Eva Air and the US-based National Airlines. It was ATC alert and repeated warnings that averted mid-air collision in Delhi.

Just 1,000 ft distance between each flight.

The pilot of the NCR 840 reportedly sought permission from the ATC to climb to 35,000 ft, but was told to hold the 31,000 ft until given further directions. ATC observed that it was climbing, and asked it to take a left turn.

EVA started to descend at flight level 330 at which KLM was flying. TCAS warning went off, alerting the pilots to steer the aircraft to a safer distance.

The NCR 840 was asked to hold the 31,000 ft position but it started to descend, coming precariously close to the EVA flight – another alarm was triggered.

The Aircraft Accident Incident Bureau (AAIB) summoned the pilots of the three flights. The three foreign airlines were flying at almost the same level which is a clear violation of mandatory separation. As per the DGCA, the rules “extend to the whole of India and apply to, and to the persons on, aircraft registered outside India.”