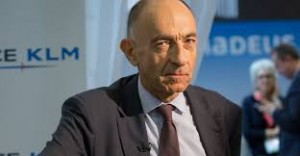 Air  France boss has quit after tens and thousands of passengers found themselves stranded by the airline’s strike.

The results of a ballot on the airline’s pay offer was published at 7pm local time where four-fifths of the workforce voted. It was seen that 55 per cent of them rejected the airline’s deal.

Jean-Marc Janaillac, the 65-year-old chief executive of the French carrier stated that time he would tender his resignation in the “coming days”.

So far Air France is grappling with the long and bitter pay dispute with the pilots, cabin crew and the ground staff. Till now there has been 13 stoppage this year.

According to the employees their wages have lost ground because of the effective pay freeze from 2011 but the French carrier is still earning profits.

A 42 per cent rise in operating profit to €1.49bn (£1.32bn) has been reported in February.  The officials had earlier praised their commitment of employees and wanted to focus on the quality of the customer service.

A rise of 6 per cent was demanded by the staff but Air France offered 7 percent over a period of four years with benefits.

Janaillac had faith in the desire of Air France staff will put an end to the destructive condition of their airline and also mentioned that the strike was incomprehensible.

Apart from the intangible reputational damage, the dispute led to a loss of around €300m. Three-quarters of flights are still operative on strike days and the cancellation affected 40,000 passengers.

It is reported that the effect of the Friday strike will continue till the weekend and the first flight from Heathrow and Edinburgh to Paris will be cancelled.