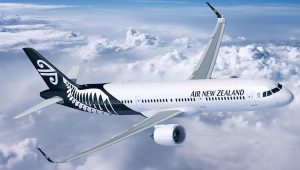 Operating revenue growth of 3 percent was driven by solid demand across the airline’s Domestic and Pacific Islands networks, as well as recently launched services into Asia and North America. This helped to mitigate weaker cargo demand, increased competition on the Tasman and the impact of disruptions in Hong Kong.

Operating costs increased 3.5 percent in the period, impacted by significant price increases in domestic air navigation and landing charges, as well as a weaker New Zealand dollar. Maintenance costs for third party contracts also increased, however this was more than offset by the related revenues. Fuel costs increased 1.1 percent, as an improvement in the underlying fuel price was offset by foreign exchange and fuel volumes resulting from growth in the International network.

Ownership costs increased by 7.1 percent, driven by the arrival of new, efficient aircraft including the airline’s 14th Boeing 787-9 Dreamliner in a premium-heavy configuration.

Chairman Dame Therese Walsh says she is proud management continues to execute the strategy that was first communicated to the market in March 2019, whilst quickly adapting the business to the evolving situation surrounding the Covid-19 outbreak.

“Our capacity discipline on existing routes, stimulation of leisure traffic with the domestic fare restructure and entrance into attractive new international markets has driven good revenue performance in the first half. Alongside our focus on profitable top-line growth, we are on track to deliver the long-term sustainable cost savings target from our business review initiatives.

“While the Covid-19 situation is dynamic, we have taken immediate steps to mitigate the impact of softer demand and I am confident that we have the ability to manage the expected short-term impacts effectively,” she says.

The Board has declared a fully imputed interim dividend of 11.0 cents per share, in line with the prior period. The dividend will be paid on 25 March, to shareholders on record as at 13 March.

Chief Executive Officer Greg Foran acknowledged the Air New Zealand team and thanked them for their contribution to the interim financial result.

“As I travel around the various parts of the business, it is clear that what makes Air New Zealand stand out from its global competitors is the enthusiasm and dedication of our people. Their focus on providing our customers with the best service will continue to be a key differentiator as we look to set the airline up for future success.”

During his first 100 days, Mr Foran will undertake a diagnostic of the airline’s opportunities and risks. This will provide the basis for determining potential changes to the future strategic direction of the airline.

“Air New Zealand holds a special place in the hearts of New Zealanders and we take that responsibility very seriously. As such, the diagnostic of the airline will look at how we can drive long-term sustainable outcomes for our customers, our staff, the broader community and our shareholders,” says Mr Foran.

Impact from the Covid-19 outbreak
As disclosed in its market announcement on 24 February, Air New Zealand has taken immediate steps to mitigate the impact of demand weakness on some parts of the airline’s network following the recent Covid-19 outbreak.

In addition to the temporary suspension of services into Shanghai and Seoul, the airline announced that it would make further capacity reductions on other markets that are showing signs of weakness following the outbreak. This includes services into Hong Kong and Japan, albeit to a lesser extent.

The reduction in services to Asia will result in approximately 17 percent less capacity across the February to June period than the airline had initially planned.

“By proactively reducing these services we are better able to manage the cost implications of making late changes to our network and can redirect our most efficient aircraft, the Boeing 787 Dreamliner, to other parts of the network,” says Mr Foran.

The airline has also noted signs of weaker demand on the Tasman, as well as parts of the Domestic network, such as Queenstown and Christchurch which are primarily leisure-based destinations that are popular with international visitors. As such, earlier this week the airline announced targeted capacity reductions on certain Tasman and Domestic services to ensure the appropriate level of capacity in this changing demand environment.

The airline will be increasing its market development investment to help drive additional demand, specifically across its Domestic and Tasman markets.

Mr Foran says that the recent challenges presented by the Covid-19 outbreak show the resiliency of the airline and its ability to respond quickly to changing market conditions.

“Air New Zealanders from across the business have been working around the clock to manage the impact of the Covid-19 outbreak on our operations. Our business is resilient, and we have demonstrated the ability time and again to respond quickly to changing market conditions. We have a highly capable and experienced senior leadership team who have dealt with challenges such as this before and I am confident that we will effectively navigate our way through this,” says Mr Foran.

Outlook
While the situation is uncertain, based on current assumptions of lower demand as well as the benefit of the announced capacity reductions and lower jet fuel prices, the airline currently expects a net negative impact to earnings in the range of $35 million to $75 million as a result of Covid-19.

At the midpoint of the estimated range above, which is approximately $55 million, the airline is targeting earnings before other significant items and taxation to be in a range of approximately $300 million to $350 million1.

The airline will provide an update to this guidance should the current assumptions materially change.

* Represents earnings before other significant items and taxation. Other significant items of $59 million comprise of $46 million related to the disestablishment of fair value aircraft hedges and reorganisation costs of $13 million.
1 Assuming jet fuel prices remain at US$65 per barrel for the remainder of the year and excludes the impact of the NZ IFRS 16.