Air Seychelles to Introduce Veuve to its Fleet in 2019 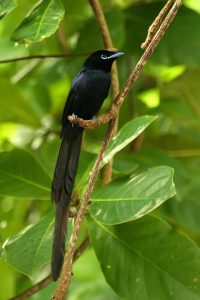 Air Seychelles has today confirmed that the national airline will be the first air company in the Indian Ocean and across Africa to take delivery of a new A320neo aircraft.

Named Veuve and registered as S7-VEV (as known locally), the newest addition to the fleet is set to be delivered in July 2019.

Endemic to the Seychelles and native to the third most populated island of the Seychelles, the birds commonly known as the Seychelles Paradise Flycatcher (Terpsiphone corvina) is primarily found in the Veuve Special Reserve in La Digue.

Currently listed as “critically endangered” by the International Union for Conservation of Nature (IUCN), in 2008, the birds were introduced to Denis Private Island as part of the national conservation programme.

Air Seychelles has over the past years extended support towards the Seychelles National Parks Authority and other responsible entities to save the species from extinction as part of the airline corporate social responsibility programme.

Most recently, in February this year, the Seychelles flag carrier together with Denis Private Island supported the University of Kent in UK and the Darwin Initiative; a UK-funded programme aimed at conserving biodiversity, with the translocation of the birds to Praslin and onwards to Curieuse island as part of a project to start a new population of the flycatchers on the Island.

Found in the tall Badamier and Takamaka trees and believed to number in the low hundreds, the flycatchers can be most easily recognized by the male birds, which have an all-black plumage with a deep blue sheen and two long central tail feathers that can reach up to 30cm long. The females meanwhile with their reddish brown wings and tails lack the elongated central tail feathers.

Remco Althuis, Chief Executive Officer of Air Seychelles said: “There are so many factors that sets the Seychelles destination apart from the vast marine life and tropical weather. In fact there are also quite a number of species that are unique to the island but they are not well known or talked about often.

“To shed more light on the ongoing efforts to protect the Seychelles natural habitat, we have opted to name our new A320neo aircraft “Veuve” to further help in raising awareness about the protection of the endemic species locally as well as across our network.

“As the birds are critically endangered it is essential that we show the younger generation the value of appreciating the Seychelles ecosystem, its natural resources and the importance of conversation not only to bring more visitors to our island but for the future generation to come.”