Airlines, tourism cos get drubbed by coronavirus, seek bailout from govt 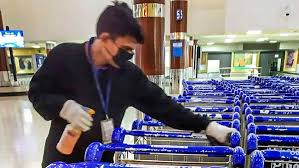 India’s aviation and tourism industries, struggling under the impact of the coronavirus, are seeking help from the government to mitigate the financial impact of the pandemic.

The Association of Private Airport Operators (APAO) has written to the civil aviation ministry seeking an alleviation package to deal with higher expenses incurred to prevent the spread of the disease such as screening of passengers and disinfection.

The body has also asked for the levy of a “nominal passenger facilitation charge” as part of airline tickets to cover the extra charges.

“The trade impact of the coronavirus epidemic for India is estimated to be about $348 million and the country figures among the top five economies most affected as slowdown of manufacturing in China disrupts world trade, according to a UN report,” the APAO said in a letter to the ministry of civil aviation.

Effective today, the government has till 15 April banned entry of most foreigners into India unless they are on diplomatic or work visas.

With fear of COVID-19 epidemic spreading among frequent fliers and holidaymakers, airports in India have seen lower international traffic in the first two months of this year compared to 2019. Fearing an impact on their revenues, major airports have asked the government to be allowed to levy a fee on each flight ticket – “airport operator alleviation package”- to cover their fixed expenses as revenues fall.

Mint spoke to four major airports in India who said their foreign footfalls and related duty-free, retail and food and beverage sales have been hit as international passengers cancel their travel plans.

“While domestic traffic has remained largely steady, there has been negative variance in international passenger traffic of approximately nine per cent in January-February with an expected overall variance of four per cent for FY20, compared with our revised forecast in October 2019. This is primarily due to a drop in international seat load factors (SLFs) by about 20 per cent to/from the Asia-Pacific Region combined with other cancellations of some frequencies by foreign carriers in these regions,” a spokesperson for Bengaluru International Airport Ltd (BIAL) said.

In the gloomy background of a drop in traffic and passenger revenues, airports revenues have declined due to reduced passenger flows, which has also impacted non-aero revenues such as less food and beverage sales, the APAO said.

“Ensuring compliance with government advisories on screening of passengers has required airports to significantly beef up its manpower deployment at airports as well as make expenditure on various items like masks, sanitizers and floor cleaners. Given our focus on passenger convenience especially at such a juncture, significant time and effort is being spent by senior management at all these airports,” the association said.

Subhash Goyal, chairman of the tourism committee at ASSOCHAM, also urged the government to help work out a package of measures for the tourism industry “to save jobs and our economy from collapse without compromising on safety and preventive measures.”

Pronab Sarkar, president of the Indian Tour Operators Association, also urged the government to review the visa ban in two weeks to see if any relaxation is possible to mitigate the impact.

So far, India has recorded 80 cases of coronavirus infections, including the death of a person from Karnataka. According to data available on John Hopkins University, there have been 128,343 confirmed cases of COVID-19 since the infection erupted in China in December. Of these, 4,720 have died and 68,324 recovered.

“It is unclear how the virus will develop, but whether we see the impact contained to a few markets and a $63 billion revenue loss, or a broader impact leading to a $113 billion loss of revenue, this is a crisis,” IATA said.

Tags: airlines, tourism cos get