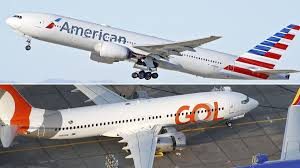 American Airlines is teaming up with Brazil’s largest airline, GOL Airlines, in a new agreement that allows American to market GOL flights to its passengers and vice versa.

The codeshare partnership will allow American to connect its passengers on GOL flights to places outside the reach of its direct flights from Miami to Brasilia, Sao Paulo, Manaus and Rio de Janeiro. American is adding 12 more daily flights from Miami International Airport to six cities across the U.S. this summer and a second daily flight from MIA to Rio de Janeiro next winter.

The deal needs to be approved by government authorities in the U.S. and Brazil.
American Airlines is the largest carrier at MIA. Last year, a similar codesharing partnership between American and LATAM, Latin America’s largest airline, was nixed by a Chilean court. LATAM created a partnership with Delta Airlines, which bought a 20% stake in the Chilean-based carrier for $1.9 billion in January. Delta has added 13 new nonstop daily flights to four cities from MIA this spring.

American Airlines’ Senior Vice President of strategy Vasu Raja said, “We don’t operate a connecting network in Brazil,” Raja said. “By contrast GOL doesn’t have a long haul network. We anticipate no regulatory challenges because we have no competitive overlap.”

To drive more traffic to Miami, American is adding one additional daily flight each to Nashville, Tenn.; Boston, Mass. and Houston, Texas; five to Orlando; two to Raleigh-Durham, N.C. and two to Tampa. The flights will commence on June 4.

The second daily MIA-Rio de Janeiro flight will be starting from Jan. 7 through March 28, 2021.

“Customers have asked us to have more short haul connections in Brazil. This is a response to customer demand,” Raja said.