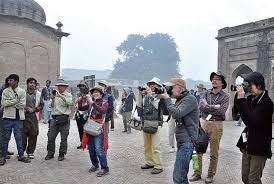 Alex, who worked on the travel blog called “Lost With Purpose”, was requested to speak at the Pakistan Tourism Summit on March. Nevertheless, she alleged that her talk was called off at the last minute after organizers said it was too serious.

After being “silenced” therefore, Alex came to conclusion to upload her talk on Facebook. In her talk, she emphasized the way government appeared serious in developing tourism.

However, in the 14-minute video, she disputed that the current social media coverage of Pakistan as an ideal tourist destination was rather ambiguous.

She emphasized that “oversimplification of travel in Pakistan” could generate problems for independent travelers as they are most probable to meet with unofficial restrictions, harassment from officials, unclear bureaucratic procedures and mandatory armed escorts, besides the potential for cultural clash.

Majority of private tour operators conceded that Pakistan as a tourist destination has long remained uncared for by the government, which for years was engaged in trying to develop a worsening law and order situation. However, they also think that the outside world considers Pakistan as the perfect tourist destination due to its landscape, culture, history and archaeology, which will attract visitors world over.

At a tourism promotion conference last week, speakers, nonetheless, protested that tourists face many problems, starting with the difficult process of getting a “very” difficult Pakistani visa.

“Last year a small number of 17,823 foreigners travelled to Pakistan on tourist visa. The number of tourists should have been in hundreds of thousands, given the potential the country offers. The entire visa process is discouraging [potential tourists],” said president of the Sustainable Tourism Foundation Pakistan, Aftab Rana, who is also a member of the new Tourism Board formed by the PM.