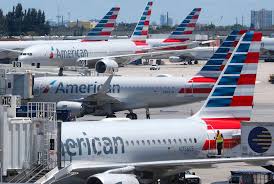 The story behind the American Airlines mechanic accused of sabotaging a plane took another disturbing turn Wednesday when a federal judge in Florida denied bail over concerns about the worker’s potential ties with terrorist elements.

Prosecutors cited two factors in pushing for the continued jailing of Abdul-Majeed Maroud Ahmed Alani, a 60-year-old mechanic who was with American since 1988 and previously worked for Alaska Airlines: he has a brother in Iraq who may be involved with the Islamic State extremist group and has made statements about wishing harm on non-Muslims, according to the to some news reports.

“I have evidence before me that suggests you could be sympathetic to terrorists,” U.S. Magistrate Judge Chris McAliley said during the bond hearing.

Since Alani’s arrest investigators with the FBI-led Joint Terrorism Task Force found out Alani lied about taking a trip to Iraq in March to visit his brother and that he told a co-worker at American this summer that his brother was a member of the extremist group and was kidnapped.

Alani’s smart phone had a “disturbing” ISIS video on it that he shared and that he sent $700 to someone in Iraq, where he was born and has family.

Alani is a naturalised U.S. citizen from Iraq. However, he is not charged with a terror-related crime.

His court appointed attorney suggested the government is over-blowing Alani’s motives. The mechanic previously told investigators he was only trying to get the flight cancelled or delayed, not hurt passengers. He said he was motivated by a bitter labour dispute between American and its mechanics that has cancelled thousands of flights and hurt overtime.

“We don’t believe he intentionally endangered the safety of people” on that flight, said Christian Dunham, an assistant federal public defender representing Alani.

“I think the government is blowing this out of proportion.”

Alani is charged with sabotaging a Boeing 737 with 150 people aboard at Miami International Airport in July by tampering with a key computer system before the flight.

American Airlines terminated Alani last week after the FAA revoked his mechanic’s license in an emergency order, according to spokesman Ross Feinstein. Alani is due to be arraigned Friday.