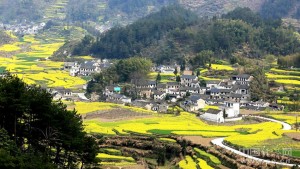 Anhui tourism promotion center was opened in New York in order to attract more US tourists.

It was organized by Anhui Provincial Commission of Tourism Development. The tourism center provides customers with a variety of tourist routes, including “Ancient Anhui Tour”, “Anhui Cultural Tour” and “Mt. Huangshan Tour”.

Wan Yixue, head of Anhui Provincial Commission of Tourism Development said that for people who are keen in China and Chinese culture, Anhui is a must-see destination.

Wan said Anhui is working to make the province a more convenient international destination and expressed an eagerness to expand tourism cooperation between Anhui and the United States.

Located in east part of China, Anhui is home to dozens of key scenic spots and has drawn in the crowds every year.

In 2017, the Anhui province attracted over 5.49 million outbound tourists and the number is expected to reach 5.82 million in 2018.