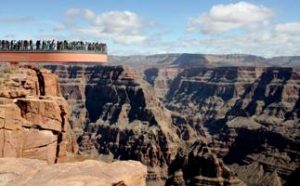 A 70-year-old woman fell 200 feet to her death at the Grand Canyon’s South Rim on Tuesday afternoon, as per the officials. Grand Canyon National Park rangers received reports of a person needing help near Pipe Creek Vista just after 1 p.m. The woman fell from the rim before the rescue effort began.

A technical rescue team used a park helicopter to find the woman’s body, which had fallen approximately 200 feet below the rim, as per the park. A team of about 15 people helped to recover the body on Tuesday afternoon. The woman tourist’s name would be released after family notification.

There has been a string of deaths at the Grand Canyon in the recent weeks. On April 3, Park rangers were notified that a man had fallen over the edge of the canyon. The body of the 67-year-old man was found about 400 feet below the rim.

In late March, a 50-year-old tourist from Hong Kong fell into the canyon while trying to take photos at Grand Canyon West, an area that is on the Hualapai Indian Reservation west of the national park. That fall happened at Eagle Point, an area close to the Skywalk attraction.

Taking reference of this Grand Canyon death, officials reminded visitors to stay on designated trails and walkways and keep distance from the edge of the rim.