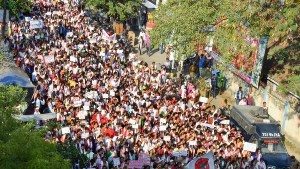 The tourism industry in Assam is taking a huge hit right now as violent anti-Citizenship Amendment Act (CAA) protests by various organizations against the controversial act continue. According to the Assam’s tourism department, Assam is facing a huge loss over Rs 400 crore revenue collection during this period. The tourism industry in Assam has been hit by the protests over Citizenship Amendment Act with many prospective domestic and foreign tourists had cancelled the bookings to visit Assam and other parts of the North Eastern states.

The Assam Tourism Development Corporation Chairman Jayanta Malla Baruah said that the tourism sector in Assam has been affected following the recent violent protests. The month of December is the main tourism season of the state tourism sector and all the stakeholders involved in the tourism sector are always eagerly looking forward to this season.

Jayanta Malla Baruah said that the main tourism season of the state starts from the month of November and continues till the month of January. A total of 4,504 foreign tourists had visited Assam during the month of December last year and around 4.25 lakh domestic tourists had visited the state during the period.  Jayanta Malla said that if this type of situation arises then it has definitely affected the tourism sector and our revenue collection also. In 2018, the state tourism department had collected Rs 1,200-1,500 crore revenue and around 30 per cent collected alone in the month of December. In this month we had collected around Rs 300-400 crore.

He further said that if this type of situation continues then it will affect the next year also because this message has gone out that Assam is not safe. They have given emergency phone numbers and tried to extend their supports to the people who faced problems. People were stranded at many places and they were rescued. We are trying our best that they do not face any difficulty.

He added that government and stakeholders concerned are trying to allay all the fears of the visitors.

On the other hand, Greater Guwahati Tour Operator Drivers Association president Ratul Das said that the tour operators alone in Guwahati had faced a loss of Rs 5 crore in last seven days during the violent protests.