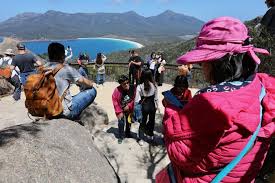 Australia will expend $5 million advertising to young Chinese urbanites to win over and tell them that regional Australia is not risky and they should come in spite of the lack of free WiFi.

China is the biggest source of tourists and international students for Australia but there were apprehensions last year that these two important export industries could be injured amid tensions rise amid diplomatic relations.

To the economy, Chinese tourists worth $11.5 billion a year.

An important tourism advertising campaign on billboards and metro stations in Chinese cities starts this week with bright imagery of the natural scenery of Australia – plus a crocodile – and the slogan “Too Australian for words”.

Tourism Australia will compensate $3.28 million, and for the advertising, tourism operators including Qantas will pay $1.78 million.

“Australia already has a strong affinity amongst Chinese travellers; however, we must continue to find new ways to appeal to the Chinese market,” said Trade Minister Simon Birmingham.

He explained that the fastest rising group of Chinese tourists was the “free and independent travellers” who are younger, more daring and stays three times longer than Chinese tourists on a group or package tour.

While Chinese students generally spend most of their time in the popular Australian cities (88 per cent) and half of their spending goes towards education fees, the “free and independent travellers” or “FITS” are more likely to travel to regional Australia as well.