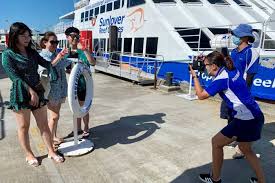 Cairns and Port Trips and Attractions have more than 200 staff across its bus tours, nature parks and sanctuaries in far-north Queensland. However, now with the corona virus threat, these regions are witnessing a lot of cancellations with the Australian government imposing its ban on non-Australian citizens arriving from China, after China’s own cancellation of outbound international tour groups.

The Reserve Bank of Australia chief, Philip Lowe, has warned that the corona virus will do more harm to Australia’s economy than the 2003 SARS outbreak. And the tourism industry is expected to be among the worst hit.

The Queensland premier, Annastacia Palaszczuk, said that the Cairns region alone have already lost $200m in bookings, and Gold Coast operators are expecting to lose $400m.
The chief executive of Destination Gold Coast, Annaliese Battista, said that China is the Gold Coast’s largest international market, bringing in about half a billion dollars into the economy, with a peak around lunar new year.

Battista said that the bushfires have already led to a softening in the market, and now with China’s banned group bookings, individual travelers have also started cancelling their trips.

“Our large accommodation service providers and we have 34,000 rooms on the Gold Coast, coming back off a bumper 2019, we are seeing about 15-20% cancellations across our accommodation sector, and obviously Chinese businesses with a high level of exposure … are feeling the pinch,” Battista said.

Battista said that the small mum-and-dad businesses are expected to suffer the most.
It is not just Queensland that is feeling the pinch. Terry Smit, the managing director of Bunyip tours in Victoria, said that he has seen a number of cancellations from agents focused on the Chinese market.