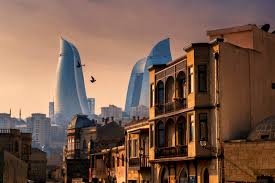 Azerbaijan is becoming an increasingly attractive destination for international tourists. The number of foreign tourists and stateless persons from 108 countries visiting Azerbaijan made up 1.1 million in the first five months of this year. According to the State Statistical Committee, this is 3.7 percent more than in the same period of 2018.

In January-May 2019, the number of Azerbaijani citizens who went abroad increased by 25.5 percent compared to the same period last year, reaching 2 million people.

Azerbaijan, the popular destination for many tourists, attracts millions of visitors every year. The beautiful nature of Azerbaijan, hospitality of its people, the country’s capital with its super modern and ancient buildings draws the attention of all tourists visiting this South Caucasian country. It is noteworthy that 2.8 million tourists from 196 countries arrived in Azerbaijan in 2018, showing a 5.7 percent increase compared to 2017. Last year, Russian, Georgian, Turkish and Iranian citizens made up the largest part of the tourists arriving in the country. In 2018, there was a significant increase in the number of visitors from the Gulf countries.

In recent years, the creation of a diversified tourism infrastructure in Azerbaijan has increased the interest of foreign tourists to the country. There are many opportunities for tourism in Azerbaijan, including rural, health, environmental, cultural, social, commercial, sport, etc.

The successful holding of international events has also turned Azerbaijan into a country recognizable by everyone in the world, and a country that many foreigners wish to visit as soon as possible.

Moreover, simplification of the visa regime plays a major role in the development of tourism in Azerbaijan. Currently, citizens of a number of countries get visas right at the Azerbaijani airports, while other tourists can visit the country by getting online tourist visas.

Azerbaijan aims to develop tourism sector by all possible means to ensure sustainable development of the non-oil sector.