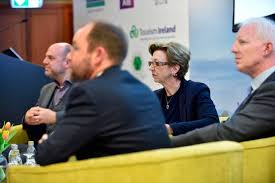 The tourism industry of Ireland is booming, but the combined effect of a ‘bad’ Brexit and a VAT rise to come into effect on January 1 could pose threats.

These issues were discussed at ‘Let’s Talk Tourism’, the national tourism forum in Killarney, Co Kerry.

“We are coming to the end of best year ever for Irish tourism,” said the opening speaker, Paul Kelly, the CEO of Fáílte Ireland. “Those are phenomenal figures… but I don’t think we can continue to grow at that kind of rate.”

Ireland is expected to witness around 9.69 million visitors this year, but the priority now for Fáilte Ireland is to continue with sustainable growth.

Diversifying beyond the British market and enticing visitors to shoulder seasons and rural areas were key themes discussed.

Minister Griffin said that the rate hike was a “challenge”.

Keeping the tourism VAT rate at 9pc was “something I fought very hard for,” Griffin said during a panel discussion. “But I didn’t get a result on it, unfortunately, not this time…”
Global tourism agencies are moving from “demand creation” to “demand management”, said Mark Henry of Tourism Ireland, who noted the exponential potential for growth in emerging markets like China.