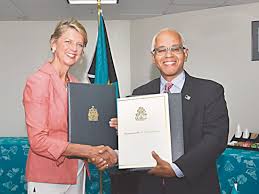 In a bid to encourage more Canadian aviation companies to flock to the destination, the Bahamas and Canada signed a bilateral Air Transport agreement recently.

According to Bahamas’ Minister of Tourism and Aviation Dionisio D’Aguilar, the agreement also allows Bahamian aviation companies to take advantage of economic opportunities in Canada.

Canadians comprise the second largest number of visitors to The Islands Of The Bahamas – equating to just over 500,000 visitors each year.

“It is an emblem of the longstanding relationship between the Commonwealth Of The Bahamas and Canada and also marks a new era of engagement. We have long been people-to-people friends. Many Canadians have flocked to your shores and I think that this agreement will further strengthen our ties and create more opportunities,” she said.

“We know that the traditional carriers have low cost little cousins to expand in the region and there seems to be no end in sight to the Canadian cold winter and hopefully there will be lots of demand that this agreement would allow us to respond with.”

Currently, Air Canada and West Jet are the major airlines that fly into The Bahamas from destinations such as Toronto, Montreal and Cadbury.

Minister D’Aguilar said it’s hoped that more aviation companies from other destinations will begin flying to The Bahamas.

This is the latest in a series of air service agreements The Bahamas has inked.

Late last year, The Bahamas signed aviation agreements with The Netherlands, Turkey, Saudi Arabia and a number of African and European countries.