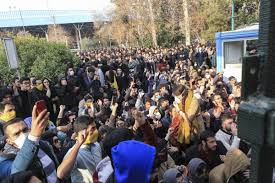 Due to the  street protests in Iran the Gulf state of Bahrain  warned its citizens not to travel to Iran under any circumstances.

The foreign ministry stated in twitter also urging  any Bahrain in the Islamic republic to leave immediately.

It further mentioned that Iran saw large-scale disturbances and an unstable security situation apart from that grave acts of violence could also be felt.

Muslim pilgrims from Bahrain  travel to Iran for religious purpose.

Over allegations by Manama that Tehran interferes in its internal affairs the relation between the monarch and Iran are strained.

So far, Bahrain is the first Gulf Arab state to issue a travel warning for Iran. Around 10 people were killed overnight in the worst street violence when protests broke.

It was one of the worst street violence so far that killed scores of people including a policeman.

Despite President Hassan Rouhani’s wow that the nations would deal with the rioters and lawbreakers the latest demonstrations came.