Bali is running out of fresh water 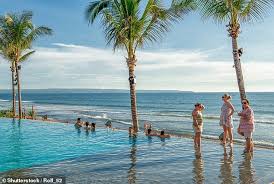 Bali is running out of fresh water and for that, tourism is being blamed.

Over half of the Indonesian island’s rivers have run dry, and the rainy season, which traditionally runs from October to April, has yet not arrived.

With more than 65 per cent of the island’s water supply being used by the tourism industry, Bali is in “real danger”!

According to journalist Anton Muhajir, “Some of my friends have had to move from their ancestral homes in Denpasar because the water in their wells has turned salty.

At Jatiluwih, where thousands of tourists go each day to see the most beautiful rice terraces of Bali, farmers are using plastic pipes to pump in water they have to buy in the south because the springs in the mountains are drying up. And now we have drought, not just in Bali but in nearly every province in Indonesia.”

Each tourist in Bali is estimated to use between 2000 and 4000 litres of water a day.

IDEP, an Indonesian non-government organization highlighting sustainable development, said that the situation is particularly worse in the south of the island, and traditional freshwater management is being hampered by hotel and villa development.

Sayu Komang, from IDEP said that the situation is becoming dreadful.