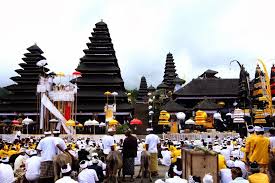 More than a million Chinese nationals visited Bali during the first eight months of 2017 resulting in a 58 per cent increase as compared to last year, according to the latest figures released last week.

China has overtaken Australia for the first time for being the biggest group of visitor arrival in the resort Island in Indonesia.

The overall visitor to the island rose by 25 per cent to more than four millions  as of August 31. One in every four tourists in Bali is from China.

Hu Yinquan, the China’s Consul-General in Bali said that following improved diplomatic relations between the country and Indonesia, there were efforts to promote the island to Chinese holiday makers. Chinese people were mostly encouraged to visit Bali due to similar cultures.

There was a significant growth in visitors from Australia, India, Japan and Bali’s 10 key target market said Adi Nugroho, the head of the local unit of Indonesia’s Central Bureau of Statistics.
The eastern part of the island is expected to face eruption of the Mount Agung Volcano that might lead to a fall in tourist numbers in the months ahead.

Efforts are being made by the President Joko Widodo and  his administration to attract 20 million foreign tourists by 2019. He also plans to implements new strategy to replicate Bali’s success in other destination across the country.

Observers forecast that the traveling trends have changed where travelers are venturing beyond traditional holiday destinations like Hong Kong and Macau to South-east Asia. The rising number of direct flights between  Denpasar and key cities has also led to the growth in Chinese tourist arrivals.

The Chinese were among the largest group of foreign arrivals for the South-east Asian nation of the year with more than 1.5 million people visiting Indonesia last year.

It has been reported that China was the second highest source of visitor arrivals contributing to 2.7 million visitors to Vietnam.