Bangkok is lagging behind other countries in terms of quirky, idiosyncratic accommodation 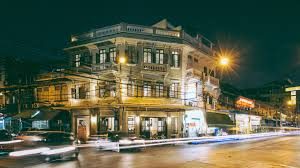 With around 35 million visitors per year, the Thai capital Bangkok speaks of spectacular tourism success, but it is lagging behind regional competitors when it comes to quirky, idiosyncratic accommodation.

Heritage hotels, many in crumbling Rajput palaces, have been one of the main reasons to visit Rajasthan, in India, since the 1960s. More recently, heritage accommodation has come up in Luang Prabang in Laos, and in Phnom Penh and Siem Reap in Cambodia.
In Thailand, while there are lots of remarkable architecture scattered around the older parts of Bangkok, especially in Chinatown and on Rattanakosin Island, countless structures are lying neglected due to lack of construction, lack of maintenance and the absence of official development guidelines.

However, in spite of challenges, there are few highly motivated young entrepreneurs who are trying to use these old buildings more imaginatively.

One of them is Kittisak Pattamasaevi, the chief commercial officer of the Montara Hospitality Group, who is the driving force behind two boutique developments: the Italian-built Praya Palazzo hotel, which offers early 20th century glamour on the banks of the Chao Praya river, and the recently opened Prince Theatre Heritage Stay. The theater building, a restored Art Deco cinema in Chinatown, built in 1917, offers smart dormitories for backpackers who are well-off and a couple of sumptuous suites behind its old cinema screen.

“Bangkok has never been a boutique hotel destination. That’s not what visitors are usually looking for, and it’s not what’s promoted,” said Kittisak. “But there’s a great deal of talk about quality instead of quantity tourists. There are hardly more than 10 heritage hotels in Bangkok because they are not really economically viable. You can make more money knocking down your old house and building a condo.”