Bangkok needs to come up with ways to tackle smog problem 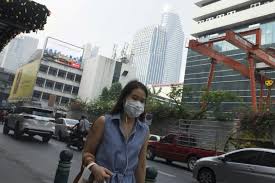 Although smog hasn’t affected tourism in Bangkok, travel industry players believe that unless a long-term solution is put forth, it is only a matter of time before pollution takes its toll.

Supawan Tanomkieatipume, the president of Thai Hotels Association (THA), said that there have been enquiries from concerned travellers, but none have cancelled their hotel reservations so far.

She opined that the ongoing air pollution was so serious that it would affect tourism, although the problem is especially bad for Bangkok as particulate matter of 2.5 microns or less in diameter reached unsafe levels in recent weeks.

The Association of Thai Travel Agents (ATTA) also reported that no cancellations were recorded from tourists with visits planned up until March, including Chinese tourists expected to arrive in Thailand during the Lunar New Year period. ATTA expects around 300,000 visitors who are likely to spend around 10 billion baht.

ATTA vice president Mingkwan Metmowlee said that unless the government has clear and effective solutions for taking care of the hazardous dust particles, there could be impact on foreign tourists’ visit from April onwards. This is particularly the case of travellers who tend to make last-minute bookings to Thailand, like those in South-east Asia.

Surawat Akarawaramat, the managing director of KTK Tour Enterprise, urged the government to think about the true causes of air pollution and initiate clear measures for handling the situation.

Both Surawat and THA’s Supawan warned about the potential impact that reports on pollution and misinformation could have on tourism.

Supawan said that air pollution is a concern not just for the industry, but also for general public health. Along with tackling smog problem, Surawat added that tourist destinations in other Thai provinces should also be promoted.