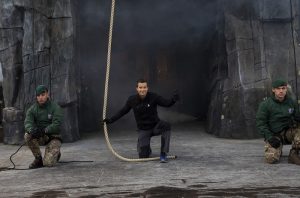 The attraction was opened by Bear, reflecting the adventure aspect with thrilling stunts featuring Chinook helicopter with two Royal Marines.

The 300 guests then enjoyed the rest of the attraction which starts with Basecamp. There were the team and individual challenges to equip them with all the skills needed for any adventure.

Bear brings to the forefront his military experiences and past adventures from across the globe.

James Thomas, General Manager inspired and created the adventure attraction was delighted that Bear’s friends and family, screen stars and others were there in the official opening. Members from the public will soon experience the thrilling experience.

Tickets to Basecamp will be priced at £20, with combined Basecamp and headline adventure packages starting from £35.

If visitors are up for the ultimate challenge, they can get a ‘Go All’ in Pass for just £160 for a full day adventure.

Some activities give an opportunity to relive Bear’s incredible adventures including skydiving, climbing high ropes and diving.

The Bear Grylls Adventure attraction lets the guests test their physical and mental strength. It opens in autumn 2018 at the NEC in Birmingham.