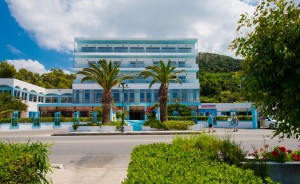 The Prime Minister Leona Romeo-Marlin and Acting Secretary General of Ministry TEATT Valya Lake Pantophlet joined the management and staff of the Belair Beach Hotel at their Soft Opening.

Little Bay Beach which was devastated by the Hurricane Irma has a combination of hotel, timeshare and condominium room facilities.

The General Manager Calvin Turner explained that Belair Beach Hotel has 70 rooms of which 24 were severely damaged during the passing of Hurricane Irma. Together with a dedicated staff who returned to work right after the storm, the hotel has reopened with 54 rooms. Mr. Turner said he is expecting to complete the remainder of the rooms within the next 3 weeks.

Prime Minister Romeo Marlin started her remarks by addressing the workers, “without you this could not happen, this is the attitude they should all have on Sint Maarten all hands on deck to ensure that they get back to where they were.

The Prime Minister Romeo Marlin thanked the hotel management for not firing the staff and even though faced with insurance challenges took the bold step to start the rebuilding process by including all stakeholders that are connected to the property and finding the necessary financial resources to ensure a successful reopening.