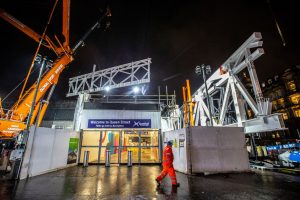 The extent of Glasgow Queen Street’s transformation is being revealed as engineers start to build the steel skeleton of the new expanded concourse.

The project team has now completed the installation of the West truss – the first major piece of the steel structure that will support the new and enhanced entrance on Dundas Street.

Spanning 74 meters in length and weighing 70-tonnes, the structure was installed in three stages in the early hours of Sunday morning.

A 750-tonne crane was used to lift and lower each section into position. The sections were then secured to steel columns using 2,300 bolts.

Joe Mulvenna, Network Rail project manager, said: “The West truss is the first completed section of structural steelwork to be installed as part of Glasgow Queen Street’s redevelopment and will form the skeleton of an iconic station for the city.

“Undertaking an installation of this complexity in the heart of Glasgow city centre follows months of logistical planning and we are pleased that we have been able to carry out this activity without additional disruption to road or station access during this busy Christmas period.

“Installation of the steel framework makes progress on Glasgow Queen Street’s transformation far more visible to customers and passers-by. It’s now possible to envisage the scale of improvements ahead, including extended platforms for longer trains and the creation of the new, spacious concourse looking out on to George Square.”

The steelwork was produced in Scotland by J&D Pierce Ltd, based in Glengarnock, North Ayrshire.

Installation of the steel support structure will be ongoing until Summer 2019. The frame will wrap around the existing arched train shed, providing additional space to extend platforms.

Barry Nicol, main contractor Balfour Beatty’s senior project manager, said: “Carrying out this level of construction activity within a city centre and railway environment is uniquely challenging and has demanded strong communication and precision by all involved to reach this point.

“The installation of the West truss is a significant project milestone and the first phase of steelwork that will create Glasgow Queen Street’s new station structure.”

The redevelopment of Glasgow Queen Street is part of the Edinburgh Glasgow Improvement Programme (EGIP) – a Scottish Government investment in the railway infrastructure to upgrade and electrify the network between the two cities.

Work to transform the station will be complete in spring 2020.