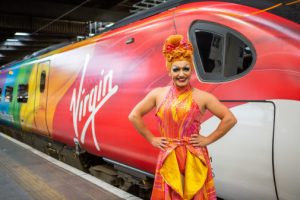 Virgin Trains joined tens of thousands of revellers at Birmingham Pride this Bank Holiday weekend for its biggest celebration yet of its diverse workforce, as Pride season gets underway.

Over the weekend, Virgin’s Ride with Pride Train, which is wrapped with the Pride colours, rode into Birmingham for the LGBT+ festival – marking the start of the train operator’s Pride celebrations.

Hundreds of people travelling to Birmingham Pride started the party early onboard the Pride Train – with entertainment from drag queen, Mary Mac, colourful face paint and tasters of rainbow biscuits and Pride cupcakes – before joining the Pride march and dancing the night away in front of the Virgin Trains Main Stage.

Mary Mac hopped onboard a Pendolino-designed float accompanied by Virgin Trains staff to perform for the thousands of festival-goers in the parade.

The two-day celebrations of the LGBT+ community in Birmingham, which is home to Virgin Trains’ Head Office, are the first in a series of celebrations Virgin Trains will mark along its west coast route this summer. The next stop is London. Throughout the Pride season, people travelling to Pride events are encouraged to share their journey using the hashtag #RideWithPride.

Victoria Whitehouse, Inclusion Lead at Virgin Trains, said: “We’re so proud of our diverse workforce at Virgin Trains and taking part in the Birmingham Pride Parade was a real privilege. We can’t wait to party onboard the Pride Train with our staff and customers for Pride celebrations up and down our route on the West Coast Main Line for the rest of the Summer.”