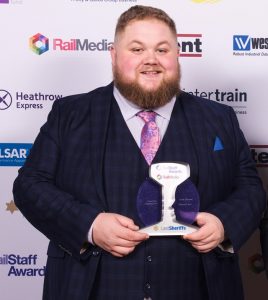 A Network Rail signaller who provides help and support to homeless people in Blackpool has won another award for his kindness.

Chris Conway, a relief signaller at Bamber Bridge, near Preston, has helped people living on the streets in the town for many years.

His kind-heartedness and leadership were recognised at the RailStaff awards, held at the National Exhibition Centre in Birmingham last Thursday (28 November) where he won the ‘Award for Charity’.

Chris regularly leads a team of volunteers who support rough sleepers in his hometown of Blackpool, providing them with food, hot drinks and support to help them change their circumstances.

Reacting to his win, Chris said: “I’m absolutely overwhelmed. I don’t do this to get recognised, so when I do it’s extra special. There’s still a lot of work to do and I want to dedicate this award to more than 700 homeless people who died on the streets across Britain last year.”

The 26-year-old started his Thursday night ‘community watch’ street walks in 2018, when up to 40 volunteers decked out in Chris’ ‘United Blackpool’ hoodies gave support to rough sleepers.

Since starting his street walks, Chris has helped get 25 homeless people off the streets and into rented accommodation.

Chris’ next effort to raise awareness and money to help the homeless is to stage a sleep-out in Blackpool on Monday 5 December in aid of Amazing Graze.

“Please do come down and join us. The more the merrier,” he added.

In September this year, Chris was made one of 125 ‘Local Heroes’ at an awards ceremony organised by the Blackpool Gazette newspaper in the iconic landmark’s famous Tower Ballroom.