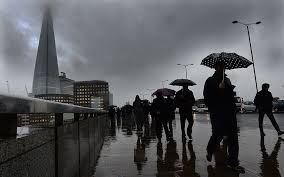 Snow has hit the U.K., bringing a chilly start of British spring time. Many people have been out taking advantage of several days of sunshine since Britain began its complete coronavirus lockdown on Monday. But snow, sleet and heavy downpour have hit the entire east coast of England this weekend, sending temperatures down to single figures.

The social media users rushed to share some of the videos of the white snow falling on Sunday  but Met Office forecaster Greg Dewhurst said it would be unlikely to lie on the ground.

It is expected to stay dry across the rest of the United Kingdom, which could continue to bask in sunny spells on Sunday.  But most of Britain will struggle to see higher than 5C to 9C on Sunday – compared to the highs of 15C to 18C last week.

Biting wind chill thanks to a plume of freezing easterly air  bring a bitter end to an otherwise warm and sunny March. The cold snap moving in from northern Europe and blowing across the North Sea to Britain has been referred to by one forecaster as a ‘mini-Beast from the East’.This will be accompanied by some extra cloud coverage and sporadic outbreaks of rain.

Sunday saw some Brits struck with snow, some even settling in parts of the north and Scotland. The Met Office has warned of more snow next month with bookies taking bets on April being the coldest ever.

The mercury is then expected to drop as low as 1C in the east overnight and 3C in the west, where there will be patchy frost. Fortunately the cold weather is expected to be short-lived, as temperatures should climb back to highs of 10C to 11C on Monday, with slightly lighter winds.