Boeing 737 with 136 on board skids and falls into St. Johns River, Florida; no fatalities 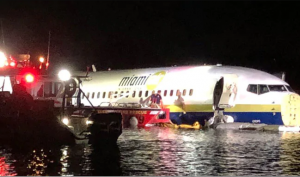 A Boeing 737 commercial jet with 136 people on board slid into the St. Johns River near Jacksonville, Florida after landing on the runaway on Friday. The flight arriving from Naval Station Guantanamo Bay went into the river at the end of the runway at about 9:40 p.m. local time.

The mayor of Jacksonville, Lenny Curry, tweeted that everyone on board the flight was ‘alive and accounted for’. Scrambling emergency workers and the crew are working to control leaking jet fuel on the water and to rescue passengers and crew members. It seems that the plane was attempting to land during a heavy thunderstorm. The plane was not submerged.

The Navy said in a statement: “Navy security and emergency response personnel are on the scene and monitoring the situation”.  About 21 adults had been transported to area hospitals and that all were in good condition as of Friday night.

This is but another incident that will keep Boeing 737 in the news.