Home » Bomb Cyclone leads to cancellation of 1,300 flights in US

Bomb Cyclone leads to cancellation of 1,300 flights in US 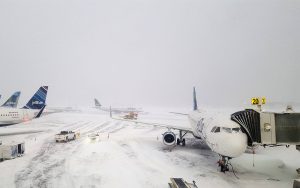 A late-winter storm hit U.S. Rocky Mountain and Plains in U.S. states on Wednesday, unleashing snow and high winds. The storm is being referred to as ‘bomb cyclone’ by the meteorologists. It is a winter hurricane that forms when the barometric pressure drops 24 millibars in 24 hours.

Bomb Cyclone stranded motorists and was responsible of 1,300 cancelled airline flights. Due to bomb cyclone or the storm, Colorado Governor John Hickenlooper declared a state of emergency and said he had activated the state National Guard to assist in search and rescue operations.

The National Weather Service issued blizzard warnings for parts of Colorado, Wyoming, Nebraska and the Dakotas as schools and businesses were closed and local authorities urged residents to hunker down. So far, 110 traffic crashes were reported in Denver. Travellers are advised to turn the lights on, set the wipers on high.

All six runways at Denver International Airport were shuttered, along with the main road into the airport due to drifting, blowing snow. An airport spokesman said 1,339 flights had been cancelled as of mid-afternoon. Colorado Springs Municipal Airport cancelled all incoming flights.

As per the Utility company Xcel Energy, about 130,000 commercial and residential customers in Colorado were without power due to high winds and wet heavy snow owing to Bomb Cyclone.