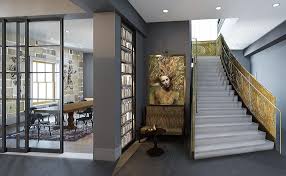 Angad Arts Hotel opened on Wednesday in the St Louis city in Missouri, offering guests the opportunity to book room having colours that matches their emotions. The hotel is owned by NRI industrialist Lord Swraj Paul.

Colours reflect our various emotions such as – green for rejuvenation, yellow for happiness, red for passion and blue for tranquility.

Lord Paul said that the hotel will contribute to the ethos of the  great city named after the King Saint Louis IX. The hotel was inaugurated in the presence of the Missouri Governor Mike Parson.

The hotel is located inside an early 20th-century building that once housed the historic Missouri Theatre and the famed Missouri Rockets dance. Steve Smith, hotel’s architect called it the most innovative hotel.

The hotel is a result of the efforts and vision of Lord Paul’s son Angad, who died in 2015 after falling from his penthouse in central London.

John Saville, British Consul General, US Midwest, said every aspect of the design of the hotel reflects the imagination and curiosity embodied by the late Angad Paul.

The 12-story hotel has 146 guest rooms including 38 suits and 25 extended room stays.