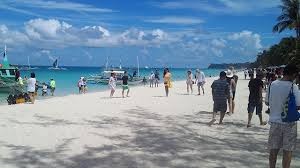 One of the most popular tourism attractions in Philippines, Boracay Island closed for six months for the major environmental cleaning up.

Philippine President Rodrigo Duterte has approved the closure of the country’s most famous tourist island of Boracay. It becomes “cesspool” due to overcrowding and development.

Boracay is located on the northern tip of central Panay Island. It is a top destination for local and foreign tourists and its sugary white sand, lively night scene and abundant water sports attracted nearly 2 million visitors last year.

The island earns the annual revenue from luxury hotels such as Shangri-La’s five-star Boracay Resort & Spa and beachside restaurants and also employs thousands of local residents.

Presidential spokesman Harry Roque announced that Duterte’s decision, saying it would be closed for six months from April 26.

Duterte, whose leadership style has been criticized as dictatorial, has castigated the local government and residents for “overzealous” development and permitting beachfront building with inadequate sewage and water treatment facilities.

There are many businesses on the island have been releasing wastewater directly into the sea, violating rules on wastewater management, according to Environment Secretary Roy Cimatu. Senior Deputy Executive Secretary Menardo Guevarra described the discussion about Boracay’s temporary closure during a cabinet meeting late on Wednesday as “exhaustive” and said affected companies would receive financial assistance.

They also discussed ways to help about 17,000 workers who may be displaced, tourism undersecretary Frederick Alegre. The island closure is shorter than the one-year shutdown recommended by the environment ministry. It comes just a few weeks after the government gave Macau casino operator Galaxy Entertainment Group Ltd permission to build a $500 million casino and resort in Boracay.

Philippine Airlines said that it would scale down its services to Caticlan and Kalibo airports, the gateways to Boracay, for six months from April following the government’s decision. It will expand flights to other tourist and provincial destinations in the Philippines.