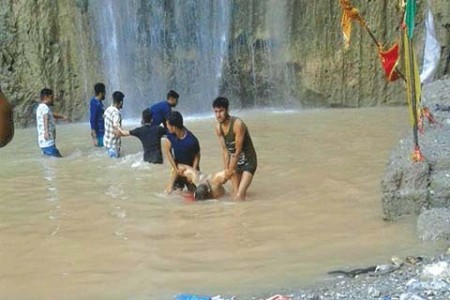 A large boulder fell off a hillock in Siar Baba waterfall located in Reasi district of Jammu and Kashmir on Sunday afternoon killing seven tourists and injuring 34 others.

Prasanna Ramaswamy who is the Deputy Commissioner of Reasi confirmed the news and added that the boulder and other debris had fallen on top of the tourists from a height of more than 100 feet.

He also asserted that army and police were immediately pressed into service for the rescue operation.

About 3.30 p.m. on Sunday a huge rock just close to the mouth of the waterfall in Siar Baba, likely to be loosened by monsoon rains, fell off the hill on tourists who were bathing in the waterfall as per Tahir Sajjad Bhat, senior superintendent of police.

Five tourists died on the spot while two of them succumbed to injuries while being shifted to Narayana Superspeciality Hospital as per the police.

Three of the deceased were identified as Kamal Kishore Sharma (40), resident of Talab-Tillo, Jammu, Sahin Kumar (29) of Jaipur, Jammu and Lucky (27) of Gangyal, Jammu.

Identities of four others are yet to be made certain.

The injured were shifted to district hospital in Reasi for initial treatment before being moved to the Shri Mata Vaishno Devi Narayana Superspeciality Hospital near Katra.

The famous Siar Baba is a religious place devoted to a local deity. Last year during monsoon, there was a massive landslide in an adjacent hill.