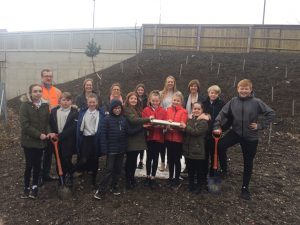 Braehead Primary School, Stirling, made its own little bit of history when Network Rail offered pupils the chance to bury a time capsule near the new Kerse Road bridge.

Items were placed within the capsule representing each of the school’s year groups (from nursery and P1 to P7), with the range of memorabilia including: a school sweatshirt signed by the pupils, photos of the school’s uniform and also building, a collection of House badges, a Fidget Spinner, a book of drawings by the nursery children, a programme from the school’s recent Burn’s Supper Night, instructions on how to do the Floss dance and a word cloud to highlight the pupils’ favourite things.

Pupils enjoyed a presentation at the site office focusing on engineering, which included time-lapse footage of the bridge demolition and reconstruction works. The children also had the opportunity to ask members of the project team questions about the project.

With the new bridge open to traffic in October 2018 and the temporary pedestrian/cycle footbridge removed last month, the burying of the time capsule on the embankment comes as the project nears completion.

The new £8m Kerse Road bridge was necessary to create the height needed under the bridge to run overhead wires  as part of the Stirling-Dunblane-Alloa (SDA) electrification programme.

Lorraine Dollard, Headteacher of Braehead Primary School, said: “The pupils were eager to be involved in burying the time capsule. They took time to carefully consider what they thought would be of interest should it be discovered many years from now.

“Seeing the film on the bridge works provided a valuable insight into a large civil engineering project taking place within their home town, as well as an understanding of the benefits of electrifying the railway line.”

Jacqueline Lloyd, Network Rail project manager, helped the pupils bury the time capsule. She said: “I hope our presentation showed how exciting working on a large-scale engineering project can be, as the bridge reconstruction is part of one of the biggest railway infrastructure projects ever to take place in Scotland.

“I am confident we will have helped to inspire several of the pupils who took part today to consider engineering as a future career choice.

“It is obvious that a great deal of thought from all of the pupils at Braehead Primary School went in to choosing each item for the time capsule. It will provide a fitting snap-shot of the time when the bridge was built should it ever be uncovered. Given the longevity of the new bridge, that could be in 100 years or more!”

The SDA programme is part of a Scottish Government funded investment being delivered by Network Rail to electrify central Scotland’s railway network.

The new bridge at Kerse Road offers the potential for Stirling Council to add a third lane in the future to meet growing traffic needs and enhance the local road network in line with the city’s transport strategy.