Brian Quinn – Soon to retire from his role with Fáilte Ireland! 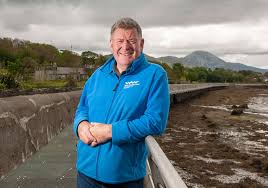 IT may be around 30 years since Kildare native and former Irish Army officer, Brian Quinn got engrossed in the growth and expansion of tourism in Co Mayo. However, as he all sets to retire from his role with Fáilte Ireland as Activities Manager, his passion has not taken a back seat.

Born in Newbridge, Co Kildare, his late father was in the army and his mother was a primary school teacher in Kildare town.

“Being from a military family, of course I was in the FCA and after I did my Leaving Cert in 1974, I joined the Cadet School,” Brian Quinn tells The Mayo News.

“The army controlled the type of holidays you took back in those days and myself and my friend, Rory McAuliffe went to the Glenans, on Bere Island, Co Cork, for a sailing course, which was the beginning of a life-long passion for the sailing.”

During that early period, his OC (Officer-in-Command) was Roger McCorley, when he was stationed in Longford. He came from a well-known Republican family and one of whose forebears has been commemorated in the song ‘Roddy McCorely’, a native of Antrim, member of the United Irishmen who fought in the 1798 Rebellion.

On a night out, Brian came to know his wife-to-be, Máiréad Burke while he was in Longford during 1985 and paradoxically she was from Castlebar, where he was later stationed. It was a brief romance and they were married within six months.

During the time, he did three tours of the Lebanon, where the couple first looked for a home to purcahse.

“We were out and about looking to buy a house one afternoon and we ended up in the Towers Bar [at Westport Quay] for a bowl of soup. Colm Cronin, the proprietor at the time, was also doing a bit of auctioneering and we saw a notice for a house in Rosmally that we live in to this day.” Like many army officers Quinn took early retirement in 1989.